BRITAIN’S HISTORY
ON YOUR DOORSTEP

Fort Amherst’s main purpose was the defence of Chatham Dockyard from a landward attack by an invading army. With nearly two miles of ramparts, gun positions, barracks and underground works it was a formidable obstacle!

The early settlement of Chatham was huddled around what we now know as St Mary’s church, looking out over the River Medway. Early records indicate a settlement here as far back as the Stone Age over 3,000 years ago! Evidence of Prehistoric, Roman, Jutish and Saxon activity was found during the building of the Chatham Lines and Fort Amherst.

Command of the Oceans

Imagine a time when Britain’s power lay in its dominance of the oceans.

Since Tudor times (over 400 years ago!) Chatham Dockyard built, repaired and maintained Britain’s warships. From the defeat of the Spanish Armada in 1588 to the 20th Century Cold War, Chatham played a vital role.

Britain began to build up its navy during the 17th and 18th centuries. But in June 1667, the Dutch, another strong sea-faring nation, launched an attack up the River Medway. England suffered a terrible naval defeat – with 13 ships destroyed and the fleet’s flagship (The Royal Charles) humiliatingly taken.

Command of the Heights

Immediately the seaward defences were strengthened. However, some people believed that the docks could also be attacked from the landward side – and that the high land around Chatham should be strategically used to protect them.

Land to build fortifications was compulsorily purchased in the early 1700s, but it took an invasion scare by the French in 1756 for work to actually begin. These first ‘Chatham Lines’ built around the dockyard were ditches, earth ramparts and timber revetments.

Unfortunately, the people and buildings of the ancient town of Chatham were in the way. The old town was demolished and rebuilt on the marshland at the bottom of the hill where modern day Chatham is now.

The Napoleonic wars were a series of conflicts between European nations and the French Republic, led by Napoleon Bonaparte. Napoleon was ambitious for power. He had risen from the post of artillery officer during the French revolution to become ‘First Emperor of the French’ in 1804. It was vital that Britain was prepared for attack!

During this time, Britain’s navy and soldiers were as well trained as possible; Fort Amherst and the people of Chatham would have been on constant high alert, ever ready for a land-based attack. A British fleet, under Admiral Lord Nelson, fought and defeated the French Navy at sea in the Battle of Trafalgar (1805).  However, the wars continued until Napoleon was defeated at The Battle of Waterloo in June 1815 by a combined European army commanded by the Duke of Wellington.

Watercolour of the Rifle Brigade in it's camp on the site in c1858.

These first Chatham Lines were soon in disrepair and useless, but between 1775 and 1783 Britain was at war with the American colonists who had powerful support from France. There were fears that the French might help America by attacking the dockyard, and so the Chatham Lines were rebuilt and strengthened with brick-lined ditches and stronger brick ramparts. Both ends were fortified with strong redoubts – Townsend in the north, Amherst in the south. This was the origin of Fort Amherst.

In the late 1700s and early 1800s, the Lower Lines were built. Fort Amherst was strengthened with the addition of Spur Battery and Prince William’s Battery (at Chatham’s highest point) and a Horn Work (an Italian style of fortification). The Guardhouse and bridge that protected the roads was also rebuilt. Cannon were placed around what was now commonly known as the Chatham Lines. Cannon must have dry gunpowder - so the Fort Amherst Grand Magazine was built as the main powder store.

Part of the site included a chalk pit with caves. These caves were extended between 1776 and 1805, creating underground tunnels and gun positions that would be well protected in the event of a siege – and allow the enemy to be fired on without being seen. The tunnels were equipped with a well, privies (toilets), gun positions, musket galleries and defendable gateways.

Fort Amherst was on high alert. Army life was harsh, and the pay was low, at one shilling a day for a private soldier: not an attractive job! There was no forced enlistment, and most soldiers signed up for the ‘bounty’ of £23 17s 6d. They were expected to get up early, do a variety of jobs and train to fight. The Duke of Wellington famously declared his men to be ‘the scum of the earth’ – adding however, that ‘it is wonderful that we should have made them to the fine fellows they are’. Married soldiers received only a half ration extra of food, but not all wives could stay at the fort with their husbands. 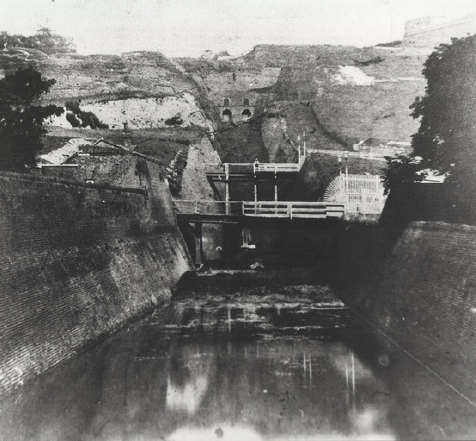 After victory at Waterloo, technology quickly changed. Guns were developed with a greater firing range, and in 1820 Chatham’s once ‘state of the art’ defences were declared obsolete.

However, during Victorian times, the entire fortifications were used as a training ground for the British army. In fact, for entertainment, thousands of people descended on Chatham to view these practice sieges, which are described in detail in Charles Dickens’ book, The Pickwick Papers.

Abandoned as a sleeping giant, Fort Amherst was woken once more to defend Medway and Britain during the World Wars of the 20th Century.

The world’s first anti-aircraft guns were mounted here to protect the Dockyard from aircraft and Zeppelins (airships). Fort Amherst and the Chatham Lines were used to train Royal Engineers and other soldiers for battle in France.

Winston Churchill declared the Chatham area to be a ‘Nodal Point’ to be defended at all costs. The Chatham Lines were adapted to form anti-tank ditches. Antiaircraft guns were installed at Fort Amherst - and used! The tunnels became a civil defence control centre, and a military anti-invasion HQ.

The Fort Amherst tunnels were adapted for Civil Defence coordination for the North Kent region.

ARP (Air Raid Precautions) was operated by Medway Group Control. Messages were taken by phone, usually by women, and emergency services given instructions of where help was required during an attack. Today, a section of the tunnels has been realistically reconstructed and equipped to demonstrate how people lived and worked in the tunnels during this time.

“Acquiring, restoring, maintaining, safeguarding and preserving the historical fortifications known as Fort Amherst and the Lines in the City of Rochester- Upon Medway and the Borough of Gillingham in the county of Kent, and making the same available for research and for the educational and recreational viewing and use by the public.”

The original Fort Amherst and Lines Trust was formed in 1981 to fend off development proposals for the ancient fortress. Supported by the two local councils of Gillingham and Rochester Upon Medway, the Trust purchased Fort Amherst from the Ministry of Defence in 1982.

The Trust was reconstituted as the Fort Amherst Heritage Trust, a Charitable Company Limited by Guarantee in 1998. The Trust owns the freehold of Fort Amherst, which forms the south-west end of the Brompton Lines Scheduled Ancient Monument, which was designated in 1959.

Seven Trustees each serve for a three-year period on rotation, after which they must be reappointed at the Trust’s Annual General Meeting (AGM). An elected Chairman and Vice Chairman are appointed on a yearly basis. The Trust is committee based, with several Limited Company Boards and sub committees reporting to the main Trust Executive for strategic overview and accountability. In addition, each Trustee has delegated areas responsibility, and is required to present a written report at each Trust meeting.

The Trust depends on volunteers to help maintain and operate the Fort. Volunteers reflect a wide range of background, age and gender, and include mental health service user groups and socially disadvantaged groups such as the disabled, unemployed and young offenders. The Trust has developed a culture of social responsibility and integration with the local community.

In 2010 the Trust merged with Medway Historical Ordnance, a separate Charity established to preserve and maintain the Fort’s nationally important collection of historic ordnance.

Experts at Fort Amherst have developed a wide range of skill and experience in the restoration and repair of guns, cannon, carriages, period ordnance and equipment. The group is also able to design and manufacture new items, suitable for display, re-enactments and filming purposes.

Please enquire for a full discussion of your needs:.

We are always looking for new Trust members. Fort Amherst is going through some changes due to The Command of the Heights project.

If you would like to be part of driving the project forward and joining The Fort Amherst Trustees contact admin@fortamherst.com.